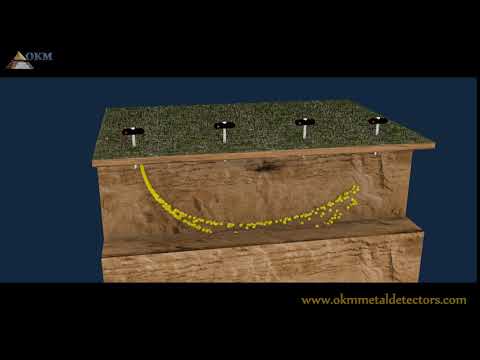 Like its big brother OKM GeoSeeker, the OKM GeoSeeker Mini utilizes a geoelectrical measurement procedure based on Schlumberger. The water detector - that can also be used to detect underground cavities - determines the soil resistivity. Based on that ground resistance the detector is able to detect underground water resources like fresh water, drinking water, water-bearing gravel and groundwater level.

Due to the fact that underground water has a very good conductivity, you can conclude that very bad conductivity is a hint for hidden cavities like caves, tunnels, chambers and underground rooms. Thus the geophysical detector OKM GeoSeeker Mini can be deployed as water finder and cavity detector at the same time.

The water detector OKM GeoSeeker Mini is operated via touchscreen. You will select the measurement depth as well as the amount of scanning points and simply follow the graphical instructions. Due to the usage of easy to understand images and icons the OKM GeoSeeker Mini is multilingual by using pure picture language.

During the measurement the electrodes have to be replaced several times to measure the ground resistance at certain places. All instructions can be read from the color display, where the results are presented after each single scan. At the very end of a measurement the final result is shown as a graphical 2d scan image.

After finishing a geoelectrical measurement the final result is calculated according special formulas to generate a representative 2d scan image of the underground resistivity.

Depending on the selected depth penetration, you can detect underground water deposits and cavities up to maximum 100 meters (328 feet). If you need a water detector that measures way deeper you should have a look at its bigger brother OKM GeoSeeker, that can measure up to 250 meters (820 feet).

The geoelectrical detector OKM GeoSeeker Mini can be used to detect underground water resources as well as hidden cavities. Both structures can be located due to its specific characteristics of electrical resistivity.

Underground water resources have a good electrical conductivity and measuring its resistivity will result in low resistance values. The capability of water detection is very useful for:

Detectable subsurface water deposits could be:

Hidden cavities and hollow spaces have a rather poor electrical conductivity and measuring its resistivity will result in high resistance values. The capability of cavity detection is useful for:

Detectable subsurface cavities could be:

The following technical indications are medial values. During operation small variations are quite possible. Technical changes due to development are possible!

OKM GeoSeeker Mini - English
Testimonials
David . Signal Hill, California US
Tennessee to Southern California in 3 days at the peak of the Christmas season. WoW
Stephen A. Mililani, Hawaii US
I just received my new coil. I received it within a week of purchase and cannot wait to install it and test it out! Coins, watch out! I'm on my way.
Anonymous Anonymous, Texas US
I got the product within a few days of ordering and the promo item within a few weeks. During this busy time of year, I was very impressed with their...