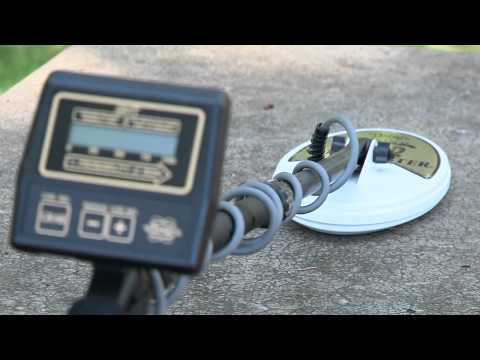 The GMT is White’s answer to the great American gold rush! With automatic ground balancing and an easy-to-read meter, this metal detector doesn’t waste your time with intricate settings. Instead it puts the best gold hunting tools in your hands, ready to go! The most exciting aspect of White’s GMT is that it is driven by an advanced microprocessor that will ignore all of the harsh ground minerals found in gold-bearing areas. The Goldmaster GMT was created for affordability and success in the most exciting aspect of metal detecting - gold prospecting!

Click Here to View the Field Test Report on this Detector!

Our Kellyco Employees and Members of the Kellyco Test Team "Field Test" and use each of the Metal Detectors we sell under the same conditions you will experience in every day use. Kellyco has been testing metal detectors since the 1950's

Here it is - our microprocessor-driven, prospecting detector. The GMT simplifies the tough task of ignoring the harsh ground minerals found in gold-bearing areas. Whether you're brand new to searching for gold, or own another detector, the GMT raises the standard for electronic prospecting.

The GMT's Fast AutoTrac® cancels ground mineralization faster and more accurately than ever before. One or two quick pumps and the ground is gone! There are now 3 ways to ID iron without losing sensitivity or depth. Use the distinctive bar graph alone or in combination with the new iron audio signal. You've got options and you choose what's right for you. The Goldmaster GMT is quickly earning a reputation as the simplest and best performer in the market. Veterans and weekenders alike are finding more gold and having more fun hunting, too!

See All Accessories
Testimonials
Dave R. Glen burnie , Maryland US
Great customer service ordered my super snipe for my Garrett all terrain Max 3 days later I received it. Could not have been better
Jonathon W. manchester, Georgia US
I have enjoyed everything I have gotten from kellyco
GEORGE F. Plymouth, Michigan US
Great customer service, fast shipping, and they even threw in a few extras! What more could you ask for!!! I will definitely buy from Kellyco again...

Customers Also Bought
You May Also Like
Shop By Manufacturer
Bolt Checkout
Sorry, but something went wrong. Please contact the seller.
x